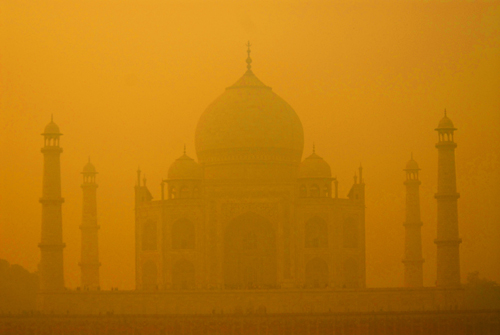 The Taj At Dawn by Richard Turner

The work of Swami Vivekananda “is a broadening of the soul.” -Leo Tolstoy.

Swami Vivekananda was the first Hindu saint to bring India’s spiritual traditions to the West at the 1893 Parliament of the World’s Religions in Chicago. Unknown until then, he became widely revered for his humility as he became probably the Parliament’s most featured speaker and then traveled throughout the United States speaking at churches and religious gatherings. His message was a simple and inclusive one: There is “one infinite spirit behind every human being…you are one with the God of this universe.”

As neither a saint or a swami, I’m off to Salt Lake City and the 2015 Parliament of the World’s Religions. I really can’t believe I’m doing this, speaking before a large group of people about religion. The good news is I’m talking about oneness, that “we are one with all species,” regardless of a religious label or none. We are all made of the same stuff. The sun shines on everyone!

Vivekananda’s work has greatly influenced me, and I dedicate my participation at the Parliament in his memory.

Rev. Dave Lyman, Assistant Minister at Spiritual Life Center and his wife Rachel, are responsible for its Interfaith Connection program and are organizing attendees from Sacramento to connect as a group and with one another while they are at the Parliament. If you know of anyone who’s going, please feel free to forward this email to them. All are welcome. Rev. Dave can be contacted at RevDave@slcworld.org.

Michael Rogers, also from Sacramento, will be sharing his music and spiritual philosophy, The Truth About Truth at the same time in room Ballroom I.

Finally, this five-day event is of worldwide significance, calling for respect and tolerance of all faiths, especially needed in light of the current world calamities. Ten thousand people, from 80 countries, are expected. I’ll let you know how all this goes in my next report.

With love and gratitude,

P.S. Join me on Facebook! Like my page to see all the fun things that don’t make it into these e-updates.

No Trees Means No Humans, and No Chimpanzees either

WELCOME TO MY BLOG